The 2015 Coast Arts festival in images 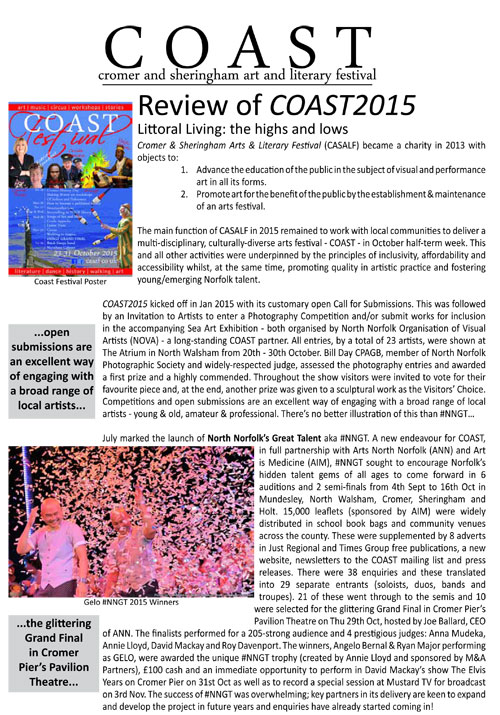 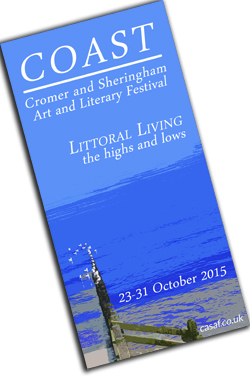 Littoral Living: the highs and lows

Cromer & Sheringham Arts & Literary Festival (CASALF) became a charity in 2013 with objects to:
1. Advance the education of the public in the subject of visual and performance art in all its forms.
2. Promote art for the benefit of the public by the establishment & maintenance of an arts festival.
The main function of CASALF in 2015 remained to work with local communities to deliver a multi-disciplinary, culturally-diverse arts festival – COAST – in October half-term week. This and all other activities were underpinned by the principles of inclusivity, affordability and accessibility whilst, at the same time, promoting quality in artistic practice and fostering young/emerging Norfolk talent.

COAST2015 kicked off in Jan 2015 with its customary open Call for Submissions. This was followed by an Invitation to Artists to enter a Photography Competition and/or submit works for inclusion in the accompanying Sea Art Exhibition – both organised by North Norfolk Organisation of Visual Artists (NOVA) – a long-standing COAST partner. All entries, by a total of 23 artists, were shown at The Atrium in North Walsham from 20th – 30th October. Bill Day CPAGB, member of North Norfolk Photographic Society and widely-respected judge, assessed the photography entries and awarded a first prize and a highly commended. Throughout the show visitors were invited to vote for their favourite piece and, at the end, another prize was given to a sculptural work as the Visitors’ Choice. Competitions and open submissions are an excellent way of engaging with a broad range of local artists – young & old, amateur & professional. There’s no better illustration of this than #NNGT…

July marked the launch of North Norfolk’s Great Talent aka #NNGT. A new endeavour for COAST, in full partnership with Arts North Norfolk (ANN) and Art is Medicine (AIM), #NNGT sought to encourage Norfolk’s hidden talent gems of all ages to come forward in 6 auditions and 2 semi-finals from 4th Sept to 16th Oct in Mundesley, North Walsham, Cromer, Sheringham and Holt. 15,000 leaflets (sponsored by AIM) were widely distributed in school book bags and community venues across the county. These were supplemented by 8 adverts in Just Regional and Times Group free publications, a new website – www.nngt.uk, newsletters to the COAST mailing list and press releases. There were 38 enquiries and these translated into 29 separate entrants (soloists, duos, bands and troupes). 21 of these went through to the semis and 10 were selected for the glittering Grand Final in Cromer Pier’s Pavilion Theatre on Thu 29th Oct, hosted by Joe Ballard, CEO of ANN. The finalists performed for a 205-strong audience and 4 prestigious judges: Anna Mudeka, Annie Lloyd, David Mackay and Roy Davenport. The winners, Angelo Bernal & Ryan Major performing as GELO, were awarded the unique #NNGT trophy (created by Annie Lloyd and sponsored by M&A Partners), £100 cash and an immediate opportunity to perform in David Mackay’s show The Elvis Years on Cromer Pier on 31st Oct as well as to record a special session at Mustard TV for broadcast on 3rd Nov. The success of #NNGT was overwhelming; key partners in its delivery are keen to expand and develop the project in future years and enquiries have already started coming in!

COAST2015’s fundraising activities began in the summer with a Norfolk Treats Raffle and a Supper Quiz. (Unfortunately a planned summer Garden Party at Templewood in Northrepps had to be cancelled. This was a great shame as previous Templewood parties had been amongst COAST’s best supported and financially beneficial events, providing a great opportunity to sell raffle tickets too!) In recent years COAST raffles have proved popular with the public and cost-effective thanks to the generosity of local businesses. This year 16 prizes were donated by museums, shops, attractions, theatres, hotels and restaurants. Prizes ranged from a £15 gift voucher for hand-made chocolates to dinner, bed and breakfast in a boutique hotel. Ticket sales – £336 compared to £585 in 2014 – were a little disappointing but, with fewer selling opportunities (e.g. at Templewood), were not entirely unexpected. Although inexpensive to run, a big annual raffle is really labour-intensive.

On 30th Sept the Supper Quiz proved successful in both financial and audience development terms. COAST had run quizzes in previous years with varying degrees of success. Competition in this arena is fierce and so in 2015 COAST wanted to offer something a bit special and so introduced the supper element (as opposed to the standard fare of sandwiches and chips). The Sea Marge Hotel in Overstrand (host of several Afternoon Tea & Talk events from 2012-14) proved an ideal partner. The hotel provided a choice of delicious home-cooked suppers for just £5 per head with the proviso that COAST would encourage its guests to purchase drinks and puddings as add-ons.

COAST hoped the event would attract 40 participants paying £10 (in 10 teams of 4) but there were actually 56 paying customers. After costs, the quiz made a profit of £263 and £80 worth of raffle tickets were sold. The Sea Marge (part of the Mackenzie hotel chain) was delighted with the event and this enthusiasm is certainly something that the Trustees plan to build on in future years.

The COAST2015 festival ran for 9 days over autumn half-term from Fri 23rd – Sat 31st October but COAST has always endeavoured to embrace and promote opportunities and events that fall outside its main festival week and, in this regard, COAST2015 was no exception. In addition to #NNGT and its fundraising activities, COAST collaborated with new and existing partners to promote both pre and post festival events including:

COAST also worked with partners to maximise promotion of these associated happenings:

COAST2015’s ambition was to work with its customary broad range of businesses, artists, charities and voluntary groups to deliver 25 diverse and inclusive events in accessible venues in Sheringham, Cromer and surrounding towns and villages across North Norfolk. Including the above, assuming a start date of 4th Sep (the first #NNGT audition) and an end date of 31st Dec (COAST’s financial year end), COAST2015 actually facilitated and/or delivered and promoted:

The main beneficiaries were children and young people, families, artists and volunteers but the inclusive programme ensured that events catered to a wide cross-section of the local community as well as visitors. The overall aims of COAST2015 were to:

The www.casaf.co.uk and www.nngt.uk websites were kept informative, user-friendly and up-to-date – with regular feeds to Facebook, Twitter and other social networking sites – by a professional communications/web manager and volunteers. Other tried and tested printed publicity (brochures, business cards, posters, indoor displays, roadside signs) and e-marketing tools were used to great effect. Monthly newsletters to COAST’s 500-strong e-distribution list featured upcoming events & opportunities; 7 daily newsletters were issued during festival week followed by a thank-you in the week after. The volume and content of editorial coverage was vastly improved on 2014 (mainly due to #NNGT’s “local interest” angle and COAST’s commitment to advertise this and other key events in various free local papers). There were several resulting features on Mustard TV and in Archant (EDP, North Norfolk News, Norfolk magazine), Just Regional and Times Group publications. Most events were attended and/or documented by a COAST rep. Comments were invited via websites, social media and e-newsletters. The feedback received was largely positive with the majority of contributors reporting benefits and/or expressing a desire to be involved in future initiatives.

COAST2015 continued to take an all-encompassing approach to income generation & cost-saving. Finance Group members, with limited support (as the budget allowed) from a professional fund-raiser, endeavoured to build on COAST’s reputation to establish pledges from previous partners – especially for in kind support and sponsorship – but also to oversee:

COAST knew that 2015 would be a tough year, financially, in a challenging economic climate of ongoing public sector cuts with the resulting increase in demand, from a broader range of worthy causes, for private sponsorship and charitable grants. Its £7,800 reserves (built up over 6½ years) proved both a boon and, to an extent, a hindrance. Some potential funders cited “healthy” reserves as a reason not to support COAST2015; conversely the Reserves Policy allowed Trustees to allocate up to ⅓ of these funds – i.e. £2,600 – to the delivery of COAST2015 and the development of projects in 2016 (e.g. the community production of Les Mis). Without this “cushion” COAST’s future could have been in real jeopardy; with it, and the efforts of volunteers to diversify income, the impact of predicted losses was substantially mitigated. Given this financial landscape it’s a great achievement that COAST2015 looks set to make a loss of approx £984 with total predicted incomings of £12,323 and total predicted expenses of £13,307. Of the £12,323 income: £2,950 i.e. 24% came from grants; £1,925 i.e. 15% came from sponsorship; and £7,448 i.e. 61% came from self-generated earnings.

COAST2015 was evaluated (in terms of its success in meeting aims, objectives & financial targets) by its Trustees at various meetings in Nov-Dec 2015. The consensus was that, given its track-record and large number of supporters, COAST should continue into 2016; with the recognition that there would need to be some significant changes – building on momentum and partnerships – to ensure sustainability and alleviate volunteer fatigue. Plans for a year-round programme, more closely aligned with ANN, AIM and other collaborators, would therefore be developed.